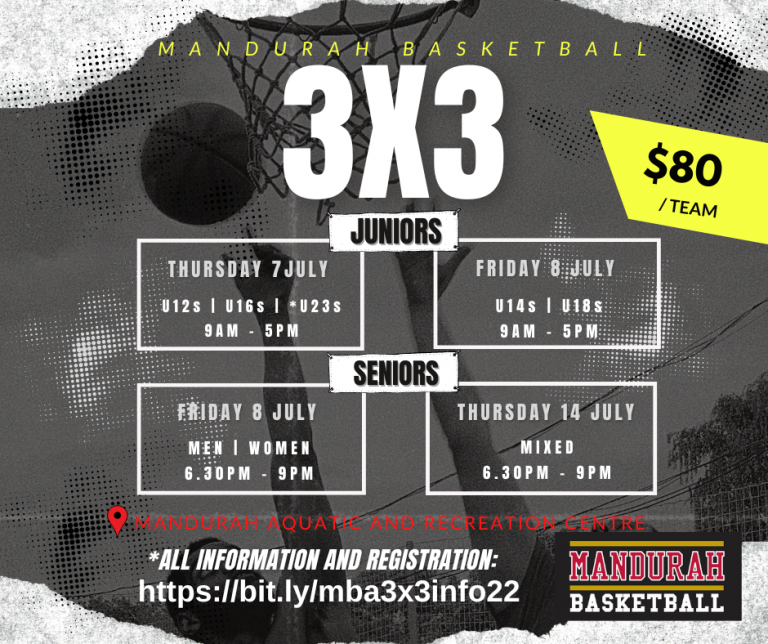 ALL TEAMS ARE REQUIRED TO READ THE FOLLOWING INFORMATION BEFORE REGISTERING

FEES
$80 per Team – To be paid with registration.
All players must have a current BWA Membership
(if your membership expires prior to the tournament or you do not have one you will be required to renew it. $36.75)

AGE GROUP RESTRICTIONS (no longer in-line with current Domestic birthdates)
Players must be Under the age of the reflective age group. For example ALL players playing in U12s must be 11 years or younger. A player can turn 12 on Friday 8 July.

There are NO exemptions for players to play down an age group. Eg you CANNOT be 12 or older on Thursday 8 July and play in (UNDER)12s.

DIVISION INFORMATION
Based on feedback received from previous tournaments we have created divisions for teams that do not have WABL players. WABL players will not be permitted to enter these divisions. Please note. If we can not field enough teams to run both divisions we will merge both competitions. If teams do not want to play in that division we will offer full refunds.

NO WABL PLAYERS/SOCIAL DIVISIONS – Current WABL/DLEAGUE/NBL Players are NOT permitted to register in the NO WABL PLAYERS or SOCIAL MIXED divisions.  These divisions have been created for social and non WABL player teams.

UNRESTRICTED DIVISIONS – All competitive teams are welcome and encouraged to register to this division. These divisions are not specifically for WABL/NBL Teams. Teams do not need to have WABL/NBL players to register.

U23s – The Open U23s division will accept Male and Female teams. Teams cannot be a mix of female and male.

MIXED : Mixed teams must have 2 Females and 2 Males registered to their team to enter. All Players must be present at the start of each game. Should only 1 male or 1 female be present, game will be forfeited.

SUBSTITUTIONS
Any whistle or re start at arc

FOULS / FREE THROWS
A team is in a penalty situation after it has committed 6 fouls. Players are not excluded based on the

Note: no free throws are awarded after offensive foul.

HOW THE BALL IS PLAYED

Following each successful field goal or last free throw (except those followed by ball possession):

Following each unsuccessful field goal or last free throw (except those followed by ball possession):

STANDINGS OF TEAMS
Both in pools and in overall competition standings, the following classification rules apply. If teams
that have reached the same stage of the competition are tied after the first step, refer to the next
one – and so on.

Find a team of 4. All teams must have 4 players. 4 players MINIMUM and MAXIMUM. It is necessary to have 4 encase of injury. It is unnecessary to have more than 4 as players will not get enough court time.
Confirm that ALL players are the CORREECT age at the time of the tournament
Collect all players email addresses so you can send out the player registration link.
Confirm if players do or do not play WABL/NBL1

Team Registrations can then be made here >> https://bit.ly/MBA3X3T2 by the Team Coordinator.

All teams are required to wear matching playing shirts. We encourage teams to wear reversible singlets so that you can easily swap if there is a clash.
Playing shirts do not need numbers and are a team decision.

SCOREBENCH
On game day a representative/parent from each team must score.